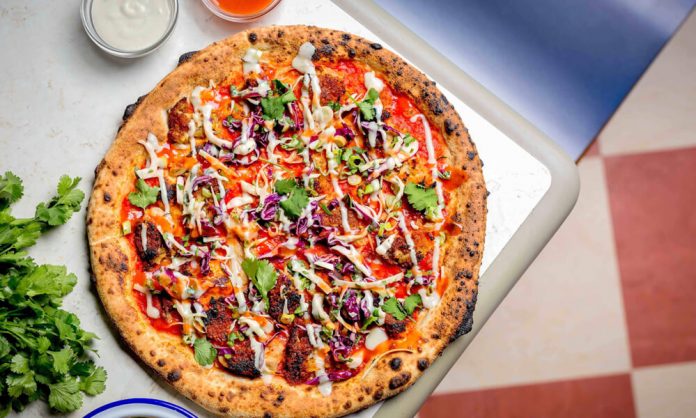 I certainly don’t go to Whole Foods for pizza and promise not to start. It’s typically some obscure baking ingredient that I’ve come to procure. So for the past few weeks now, I’ve ignored the vegan pizza in the prepared foods section. I didn’t realize it was made with the Great Daiya, the latest dairy-free and allergen-free cheese alternative, the talk of vegans nation-wide.

There I was, trying a slice, just so I could understand what everyone was all excited about.

There are usually two varieties of vegan pizza at the Whole Foods on South Street – plain and a “Fiesta” pie with veggies on it, both made with whole wheat crust. I went with the regular, immediately impressed that the slice looked appealing: the cheese was melted properly and blanketed the pie with gleaming coverage. Shreds could not be detected and it didn’t have the typical vegan pizza look to it. After biting into it, I thought the cheese was overwhelmingly oily and slick, slightly creamy, leaving a film in my mouth. I missed the stretch of mozzarella. I missed the sauce. I missed the snap of crisp pizza crust. Overall, I thought that there was way too much Daiya on the pizza. A lesser application and I might not have found it so odd. I’ve tried many a vegan pizza and have yet to find anything simply amazing.

After checking out Daiya’s website, I now see that the cheese is made from canola and safflower oils and tapioca. That might explain the extreme greasiness of it. It comes in Italian Blend and Cheddar Style, and I imagine it might work a lot better for use in things besides pizza. The cheese is entirely vegan and is soy-free and devoid of other allergens. It should be available for retail in the future.

Why Vietnamese Bruschetta is So Hot Right Now and Other Questions