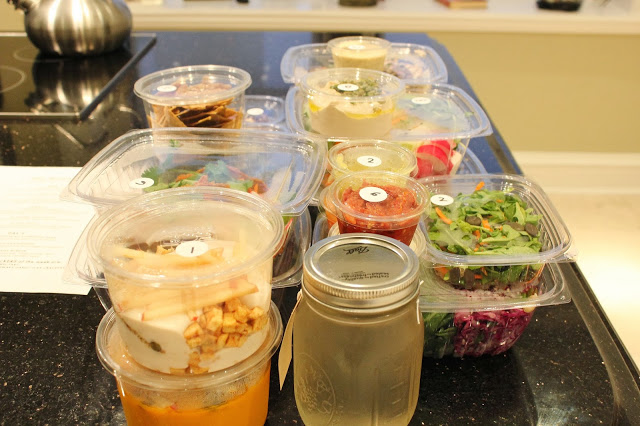 A few weeks ago, I featured Full Moon Fare, a Fishtown-based raw and vegan food delivery company, with a promise of a review. Shortly after, I placed my order and was delighted when Lisa showed up with 3 days of gorgeously prepared, nutrient-packed food in a large box. What a treat for me, as I had a few busy days ahead and not much time to prepare my meals. 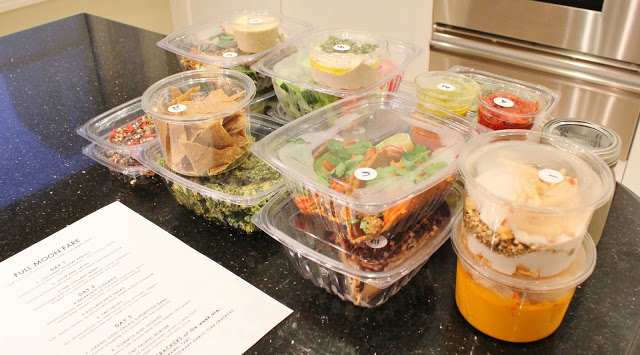 The box contained 3 days of meals, along with snacks (a generous container of kale chips, flax crackers, and a massive slice of Pecan Caramel Tart) and a jar of fresh coconut water (which tastes a zillion times better than the packaged stuff) as well as sauces/dressings to accompany the dishes. Each item was labeled in the order that it is suggested to be eaten, and the menu clearly described what should be eaten on Days 1, 2, and 3. I deviated a bit from the order (I just couldn’t resist having those raw tacos on Day 1), but everything kept well and tasted fresh throughout the 3.5 days that I enjoyed it. As a bonus, each item is packaged securely and is easy to transport should you be taking lunch to work or your food on the run.

What I loved about this plan was that I didn’t crave cooked food the entire time, even though the temperatures were dropping, and there were enough spices and fall flavors to keep me satisfied. I also liked that the portion sizes were quite generous, because my husband wanted a taste of pretty much everything. We both were pretty much obsessed with the tart, as well as the Coconut Yogurt Parfait, which he said he could eat every day. The dishes I enjoyed the most were the FMF Tacos with Cashew Sour Cream & Sundried Tomato Salsa, the Cashew Hummus (sorta like cashew cheese) with Veggies, and the Breakfast Scramble (I was delightfully surprised at how much I liked this). I felt light and energized after all of my meals and only skipped one meal (it was our anniversary that night) which I added to another day.

Overall, I thought everything was especially tasty, and really liked the quality of the ingredients and the details involved. Lisa is incredibly talented and it’s not every day that you find raw food executed so flawlessly right in your backyard (well, close enough). This is obviously food prepared by someone who cares about it tasting really good, rather than just being raw. Full Moon Fare is a refreshing new addition to Philly, and makes smart eating a lot easier.

If you’d like to give it a try, Full Moon Fare offers $25 off your first order. The box is $150 for 1 week and $550 for 4 weeks. You can check out the weekly menu on Facebook. This week’s Pasta Primavera sounds fantastic!

And if you’re looking for a quick recipe to try tonight, be sure to try Lisa’s Curried Carrot Apple Soup (scroll down for the recipe). As per Lisa’s advice, place a pot on the stove until hot, and then remove the pot and add the soup to the pot to warm it gently while still keeping it “raw”. It really hits the spot.